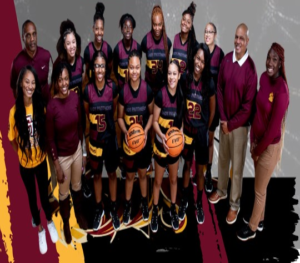 “They were better prepared and had more weapons than we had and I think that’s what it really came down to,” Forest Park head coach Steven Cole said.

Woodward led 11-8 at the end of the first quarter.

A minute into the second, Forest Park’s Michayia Davis made a 3-pointer to tie the game at 11-all.

Baskets by Aaishah Berry and Yasmine Allen gave Forest Park a 15-13 lead with 5:30 remaining in the second quarter.

“Woodward is a really good team,” Cole said. “They have one of the best players in the state (Sydney Bowles) and a couple more players behind her and they’re a really good team. They’re well-coached and do a good job with their coaching staff also.”

“She gave it everything she had but right now in this game it just wasn’t enough,” Cole said. “I think she’s really good as a 10th grader but she’s still got some work to do and if she puts that work in she’s going to be a D-I recruit or something like that.”

“Our season was good; we were one of the last teams standing in 5A,” Cole said “What can you say?”

Forest Park’s run in the state playoffs featured wins over Wayne County (55-20 in first round), Southwest DeKalb (59-32 in second round), Loganville (54-40 in the quarterfinals) and New Manchester (60-38 in the semifinals).