POWDER SPRINGS – When it comes down to volleyball, errors can often spell disaster and for Yolanda Mays, one error stood out that ultimately led to the Lady Knights losing 3-2 to the Coosa Lady Eagles for the second year in a row.

The Lady Knights won the first set against Coosa in seemingly dominating fashion. But the fact that the Lady Knights came out firing against their opponent ignited the fans who were in attendance and gave Elite some fire.

The first set was decided 25-15 and the Lady Knights looked to be in control of Coosa, despite giving up the first set point. The Lady Knights rallied back and picked up numerous points in the set early from a combination of solid serving and hitting.

Coosa was just out of sync at the start but the Lady Knights pretty much gave the game away late as errors began to creep into the teams’ offense.

With close to ten ties, Coosa showed they belonged in the state title match once more and broke away late as the amount of miscommunications began to mount. Following the second set loss, Elite came out picked up the first three points of the set.

However, the Lady Knights began to fall behind but pulled it out late with an all hands on deck approach that gave them a 2-1 advantage with just one more set needed to win the state title.

The championship was there for the Lady Knights when the fourth set started but the program struggled to close it out. An early lead, for all intents and purposes was met with resistance from Coosa. The Lady Knights let their foe stay in the set but the Lady Knights’ valiant effort to stop Coosa’s comeback, failed in a 25-21 final.

This set up one of the most intense sets in volleyball, fitting of a state championship match. The Lady Knights started off hot, once again. Three straight set points gave the program the lead but Coosa rallied back.

With the final set off and running, a 3-0 lead was soon met by a Coosa 4-4 tie. Neither team gave an inch.

Until Elite was just two points away from the victory. The score was a 13-10 advantage and the Lady Knights were in position to usurp the Lady Eagles.

The door opened back up unfortunately as the Lady Knights allowed Coosa to tie on match point. When the game was down to an 17-16 game, Elite just couldn’t pull it out.

The final serve targeted a new player who entered the game for an injury and the ball returned wide right. Just wide enough for the Lady Knights to watch the ball hit the ground and end their title hopes in the process. 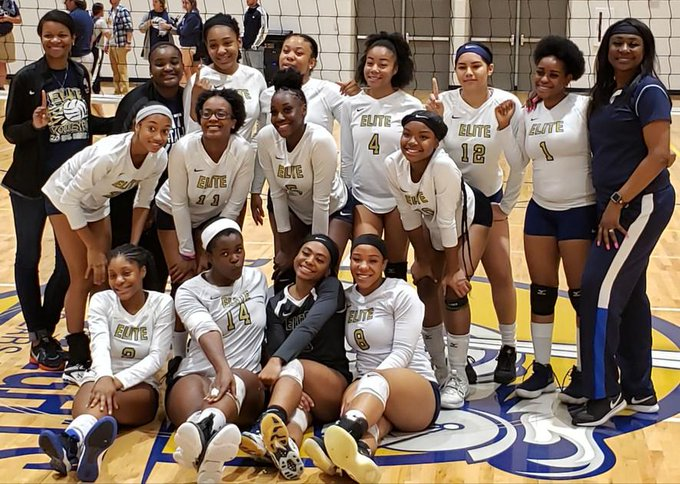