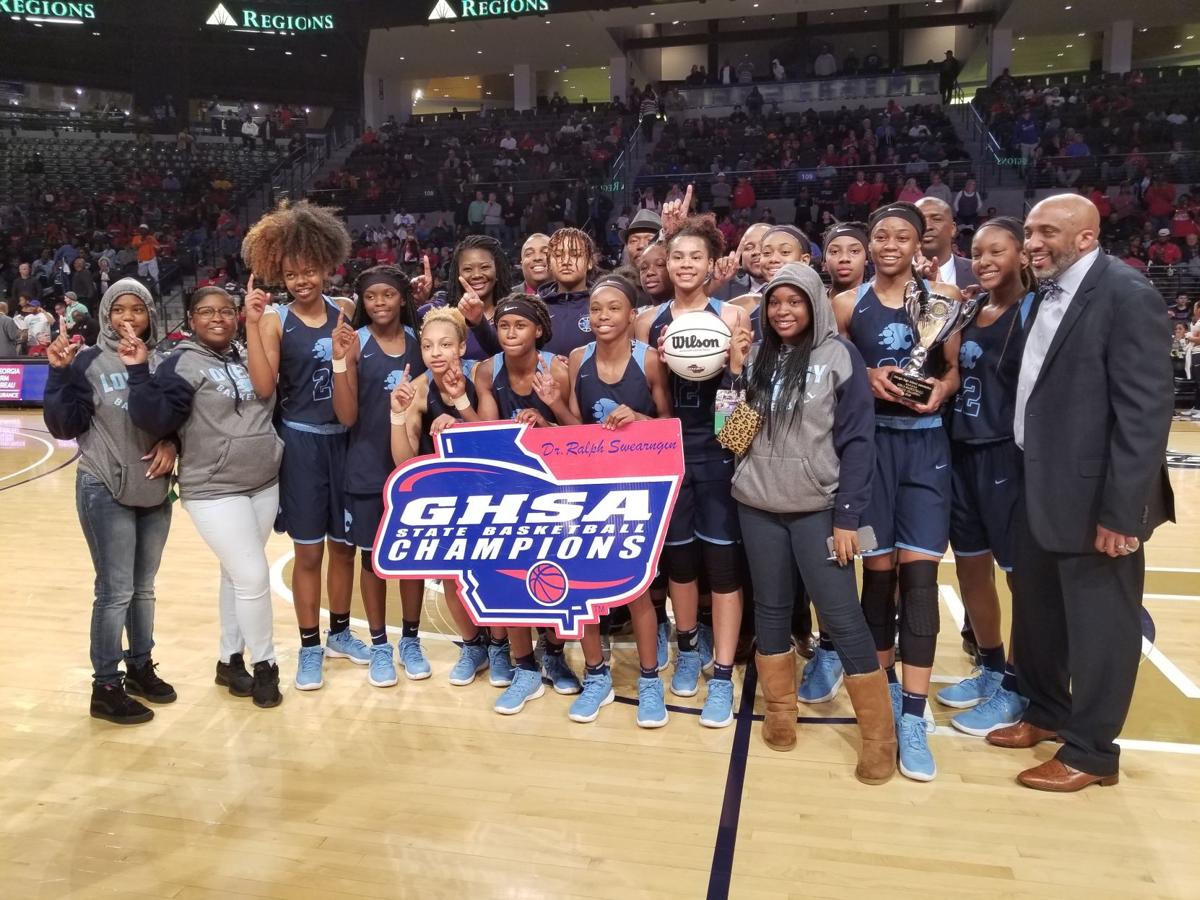 That slogan has been the rallying cry for the Lovejoy Lady Wildcats all season. Lovejoy was able to accomplish its goal Friday night with a 57-41 victory over Harrison to win the Class AAAAAA state championship at Georgia Tech’s McCamish Pavilion.

The Lady Wildcats struggled offensively for most of the game, and trailed at halftime and after three quarters. Yet, they relied on their trademark defense in the fourth quarter, outscoring Harrison 18-7 in the final period to pull away in the end.

“I thought they played like youngsters in the beginning in the first two quarters,” Lovejoy head coach Cedric King said. “In the second half they composed themselves, they took control and just did what we do. I was proud of the way they executed, they trusted their preparation, just came out and kept going. We knew through film study that the fourth quarter has been a struggle for them because of their lack of depth, so we kept battling. You keep battling, keep battling and you get good results.”

It was Lovejoy’s young roster — led by sophomores Genesis Bryant and Anaya Boyd — that made the necessary plays in the fourth quarter, not Harrison’s senior heavy squad. Boyd finished with 20 points and five rebounds, while Bryant added 14 points and four assists.

“They were prepared, I knew they were prepared, so it was just about trusting what you’re doing,” King said. “But they’re still teenage girls, they showed nerves too even though they’re the more senior-laden team…I thought Anaya Boyd, once she settled down in the second half, I thought she was bananas. She just attacked. I don’t think anybody can guard her.”

“I thought J’Auana played great, I thought Avanna played great, setting the tone. She had such a great week of practice to set the tone,” King said. “We always say she’s the head of the snake and I think she did a great job.”

Harrison entered the game knowing that they would have to deal with Lovejoy’s pressure defense. The Lady Hoyas did a quality job, and after falling behind 8-2 in the early going, responded to tie the game at 10-all after one quarter.

Lovejoy fell behind in the second quarter by as many as five points. The Lady Wildcats scored the last three points of the quarter to cut the deficit to 19-17 at halftime. They shot 27 percent and turned the ball over 12 times.

Both teams played better offensively in the third quarter, and the lead changed several times. Preston hit a 3-pointer, Lovejoy’s first, early in the quarter t0 cut the deficit to one, 21-20. Lovejoy took the lead three different times, but Harrison responded each time to tie the game back up. The Lady Hoyas went ahead 32-31 at the 2:10 mark, but Bryant made her first 3-pointer of the game to put Lovejoy back in front by two. Harrison scored the final four points of the quarter to take a 36-34 lead into the final period.

Lovejoy sat Bryant and Boyd in the final minute of the third quarter, a decision King said he thought paid off in the fourth quarter.

“We took out our better players because we wanted to give them a break to finish the game,” he said. “I thought two points, with the way we were working and the way they weren’t scoring — we went into our matchup and just played solid — I thought we would take over.”

Preston and Robinson scored back to back baskets to give Lovejoy back the lead. It was the start of a 12-0 run that saw the Lady Wildcats go up 46-36. Harrison’s Harper Vick finally ended the run at the 3:27 mark, but the Lady Hoyas were only able to get as close as seven points in the final three minutes.

The Lady Wildcats went through a gauntlet to win the title, topping No. 2 Winder-Barrow, No. 7 Northview and No. 3 Harrison.

“If you want to win it you have to beat everybody, right,” King said. “You don’t run from anybody, you play what’s in front of you, you beat them and you don’t worry about anything else.”

The victory was emotional for King personally. After narrow misses at Carver-Columbus and Sandy Creek, the veteran coach is finally a state champion.

“It’s awesome, man. Third time is the charm, I love those girls,” he said.