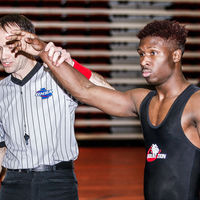 JONESBORO — Two Clayton County wrestling programs will compete in the 2017 GHSA Class 6A State Duals Championships this weekend after finishing in the top two of the Region 4-6A Duals Championship held Monday night at Mount Zion High School.

Forest Park won the event to clinch another region championship for head coach Don Williams. The Panthers topped Mount Zion in the championship round.

“It was a blast, it never gets old winning area titles and qualifying for the State Duals,” said Forest Park head coach Don Williams. “This group of young men have worked so hard this summer, and they have gone through a couple of setbacks this year, but they have stuck to it and are now reaping the fruits of their labor.”

Mount Zion will also compete in the state championships this weekend for the first time in school history.

“There was a sense of jubilation, realizing that all the hard work that had been put in in a short amount of time came to fruition,” said Mount Zion head coach Kevin Jones. “When I came here three years ago, I wasn’t the coach here, but there were only four to six kids on the team. The following year we had some success on an individual status, but we weren’t having any team success. I championed for a lot of kids in other sports and beat the bushes in the hallway to come to the wrestling program. It worked out well piecing it together.”

Jones said Quinton Newton, Jermaine Habersham and Quintavious Neal all stood out individually and finished unbeaten at the event.

The Class 6A Duals State Championships will be held Thursday through Saturday at the Macon Centreplex. Three-day tournament passes can be purchased for $24.