The University of Minnesota football team and the Goal Line Club celebrated the 2016 regular season at the annual Golden Gopher Football Banquet on Sunday afternoon at the Hilton Minneapolis.

The highlight of the program was the announcement of the team’s annual awards. Sophomore running back Rodney Smith was honored with the Bronko Nagurski Award, which is given annually to the team’s most valuable player.

Smith also received the Bruce Smith Award (outstanding offensive player) and was named the Bob McNamara Offensive Back of the Year.

Fellow MMHS Alum Jonathan Celestin was feted with Linebacker of the Year honors.

Congratulations to these young men for their accomplishments and for representing their families, schools and Clayton County with great honor. 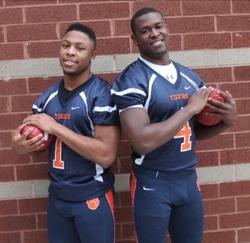